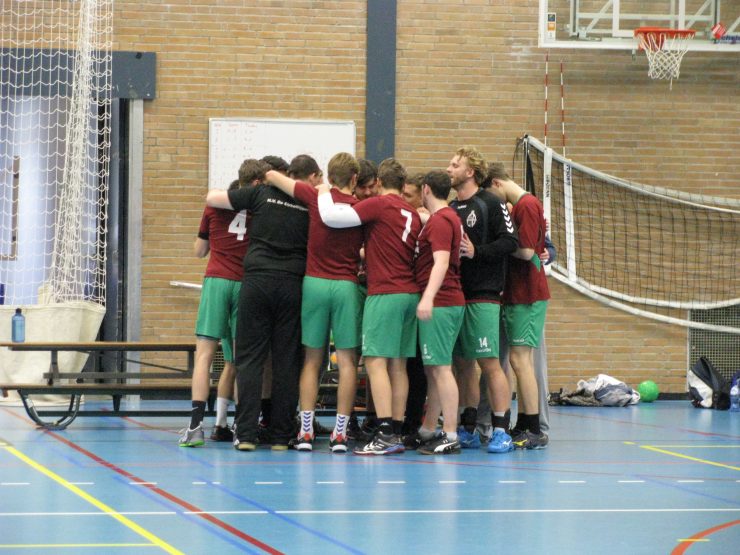 Today was an early game for the Cirkeltijgers, as the match against Unitas was at 11:00 in the morning. Just shy off a full squad line-up the men were ready to bring all the points at home for the win. The team that was the opposition of the Cirkeltijgers was a young squad, with most of their ranks filled up by youngsters coming up from the A-youth league of Netherlands handball competition. What also add a bit of excitement to the game, is that one of the players of the Unitas squad was an ex-coach and the brother of the current trainer at the Cirkeltijgers.

As the game started, Cirkeltijgers started with a 6-0 defence and game out hard and fast. This resulted in a quick interception by Marijn, but unsuccessful did not end up as a breakout goal. Instead first blood was made by Unitas who source 10 seconds off the first minute of the game. Cirkeltijgers first goal game from Jannik over on the right wing, at 1:59.

A few minutes later, Bart ‘the buster’ bujis scored a great breakthrough goal at 3:13, with a second breakout goal by Bart later at 11:00. Most of the first half, especially at the first 15 minutes, the Cirkeltijgers defence was strong, and denied Unitas the chance and ball to play their game.

The first subustition by Cirkeltijgers was made when Iggy clashed with their player, resulting in a possible ankle injury. However, unlike the French, Iggy did not back down, did not surrender, game back into the game moments later.

Lasse, unfortunately for his aggressive hugging defence, earned Cirkeltijgers their first yellow card around 12:50 mark. 14:25 Mathias earn the Cirkeltijgers a penalty, which surprisingly Bart could not finish off, to the shock on the bench and in the crowd. In the last 10 minutes of the game, Cirkeltijgers concentration was lacking, which resulted in mistakes, which Unitas capitalised, pulling ahead at half-time with the score 8-12.

With the break starting, the captain and coach, gave their thoughts on the first half. That the referees were giving some questionable decision, but the Cirkeltijgers have step up in defence, to keep hitting them hard, to go for that interception and pile on the pressure at them. In offence we need to play smart, don’t do stupid shots, get in close, and pressure them and use the gaps to open them up and score.

As the second half began, Cirkeltijgers revert back to the first half starting line-up with the exception in goal, as there was a switch by Max and Rasmus. Second half, start strong, fast and a positive start for the Cirkeltijgers, this resulted in a quick climb up in goals and narrowing down the lead of the opponents. In defence, the Cirkeltijgers started to become a wall, that was beginning to be hard to penetrate. Whats more is the wall, was hitting the offence   hard, results in their attack being in between a rock wall and the hard place.

This hard place was the Lasse, being outstanding in his aggressive Oktoberfest beer hugging defence, which results in numerous blocks, and stoppage in play for free throws of the offence. Although this aggressive play did results in him getting a 2 min bin in the middle of the second half.

In offence, the Cirkeltijgers were clinical, hitting their shots, playing the systems, piling on the pressure, resulting in a draw with seven minutes left to play at 20-20. In these last seven minutes Marijn ‘the Mastermind’ van Geet, pulling the Cirkeltijgers close to victory this is pinpoint shooting at penalties, which there were numerous. As well as interception and breakthrough goals. Although, I guess the excitement got to Marijn ‘the Mastermind’ as he got himself a 2 min bin for aggressive defence.

With 5 mins left to play in the game, the game was tight, very tight. With the score at 22-22, it was anyone game. Then suddenly, making up for his earlier 2 minutes sinbin, Marijn ‘the Mastermind’ did yet another wonderful interception and scored his own breakout, making the game 24-23 in favour for the Cirkeltijgers.

In the last play and attack Unitas had the chance to claim a draw, however, the Cirkeltijgers Danish goalkeeper saved their final shot. Leaving the game in the hand of the Cirkeltijgers to slow the clock down, giving them the win. It was a hard-fought battle, with the second half being the deciding moment for the team and their victory. Fingers crossed the next match for the Cirkeltijgers will not go down to the wire.